A Brief History of the Parish

Barton Bendish has a long history, and several properties in the village date back to the 1700s. Stone Age habitation is evident from the number of axe heads found in parts of the parish, other items can be traced back to the Iron Age.

Barton Bendish, as we know it now, really began to take shape in late Saxon times. The village is mentioned in the Domesday Book of 1086 where the name is given as “Bertuna”. In the Saxon language Barton refers to an outlying settlement and Ben Dych (Bendish) means inside, by or within a ditch. This refers to the Devil’s Dyke which was a large Saxon earthwork running nine miles between Caldecote (near Beachamwell) and Narborough. It was built by the Saxons as a defence against the Danes at the time of their invasion of East Anglia. The bank also served as a boundary line to the Clackclose Hundred of which the area of Barton Bendish was part.

The family name of De Bendich (or Bendish) was recorded in the reign of King Stephen who acceded to the throne in 1135. In the reign of Henry II (1154) nine small manors, four of which were in Eastmore (Eastmoor), came into the possession of the Lovell family who built a Great Hall at Barton Bendish, this stood close to the site of the present Hall.

The War of the Roses

The third son of Sir Ralf Lovell who was born at the hall, one Sir Thomas Lovell, notably fought as a knight in the War of the Roses and was held in very high esteem by Henry VII. Thomas fought at the Battle of Bosworth in 1485, when Henry landed on the south coast with a couple of thousand French mercenaries and a few Lancastrian knights. Lovell was knighted by Henry VII for his prowess. His elder brother Sir Gregory was also made banneret at Stoke. In 1485 he was created President of the Council and Chancellor of the Exchequer for Life.

The Lovells were forced to sell the Hall in the early 1500s and various people owned it until eventually it was purchased by Sir Richard Berney in 1665 whose descendants continued to reside there intermittently for nearly three centuries. Sir Thomas Reedham Berney was the last of the Berneys to live at Barton Bendish. At some time in the 16th or 17th centuries a new Hall was built the remains of which form part of the present day Hall.

Further construction done in the Elizabethan style took place in 1856. After the Berneys left, it was let out until finally in 1943 the Hall was taken over as a billet for the Land Army. Subsequently the estate and the Hall were occupied by the Gotobeds, and then purchased by an Italian farming and agricultural conglomerate whose UK subsidiary went under the name of ‘Agricola’. The present owner, Count Luca Padulli, purchased the entire estate in 1992.

Population and Life in the Village

In 1672, records show there were 98 hearths and stoves in Barton Bendish that were subject to taxation, the only accurate measure of population for that time. In 1801 the population stood at 355 which had risen to 495 by 1851. In the census of 2011 the population of the parish was recorded as being 210 living in 96 households. Generations of families such as the Rumballs, Coopers, Cromes and Whitfields have been recorded as living in the parish since the 1700s. Other notable local families were the Horns and the Riches.

For centuries farming had been at the heart of village life with many men being employed on the land but mechanisation took over in the 1960s. Inevitably with the reduction in number of agricultural workers and their families the social structure of the village changed leading to the closure of the school in 1974 and a few years later the shop and post office.

The school was built in 1874 and finally closed a hundred years later in 1974. In the 1940s several children from the village passed the 11 plus and went on to the Grammar School at Downham Market. With no school buses or taxis in those days, this meant each of them had to cycle the eight miles to and from school each day. 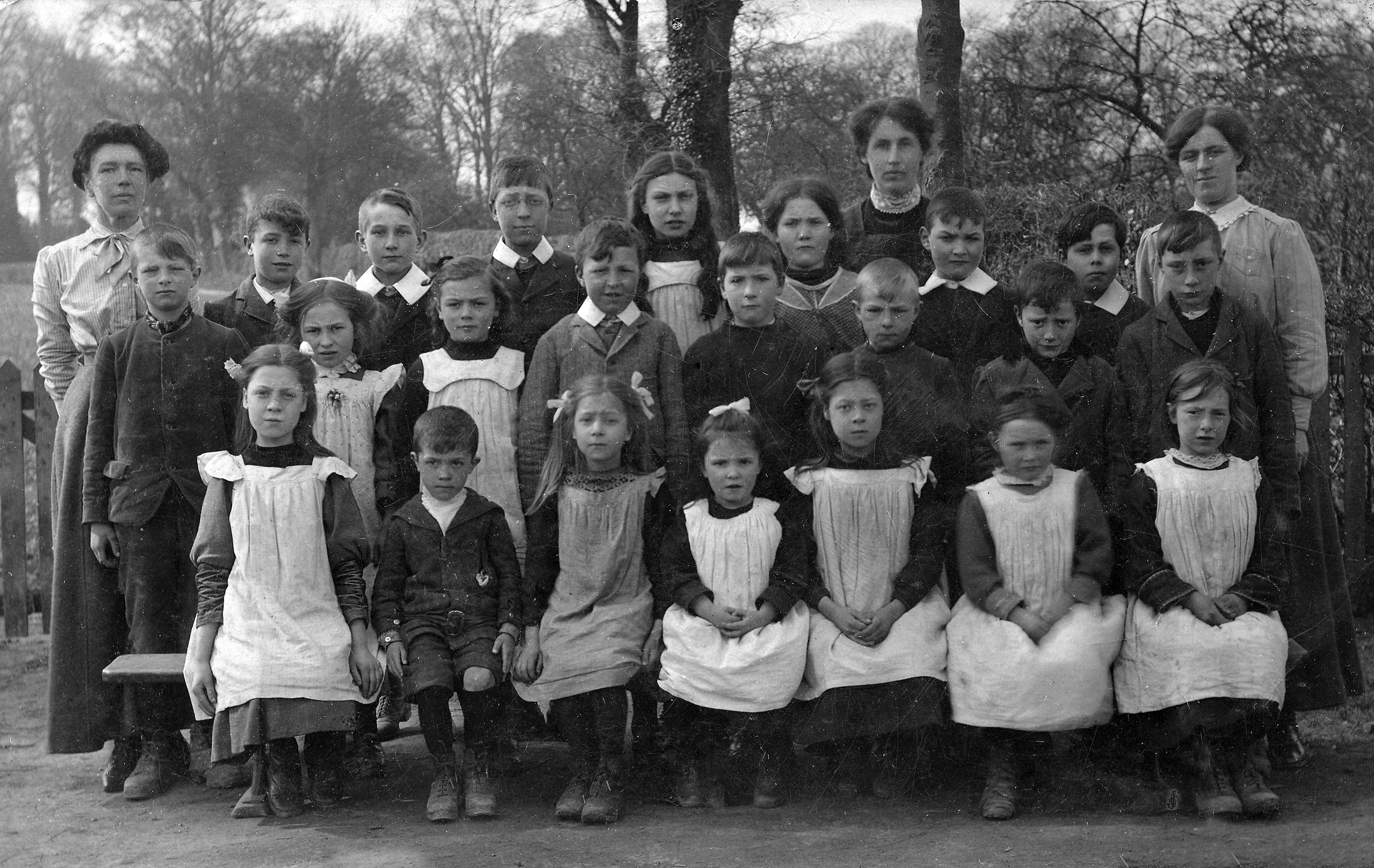 Teachers and pupils of Barton Bendish school in 1914

The post office which for many years had been run separately amalgamated with the shop in 1967, both closed at the same time in the late 1970s. 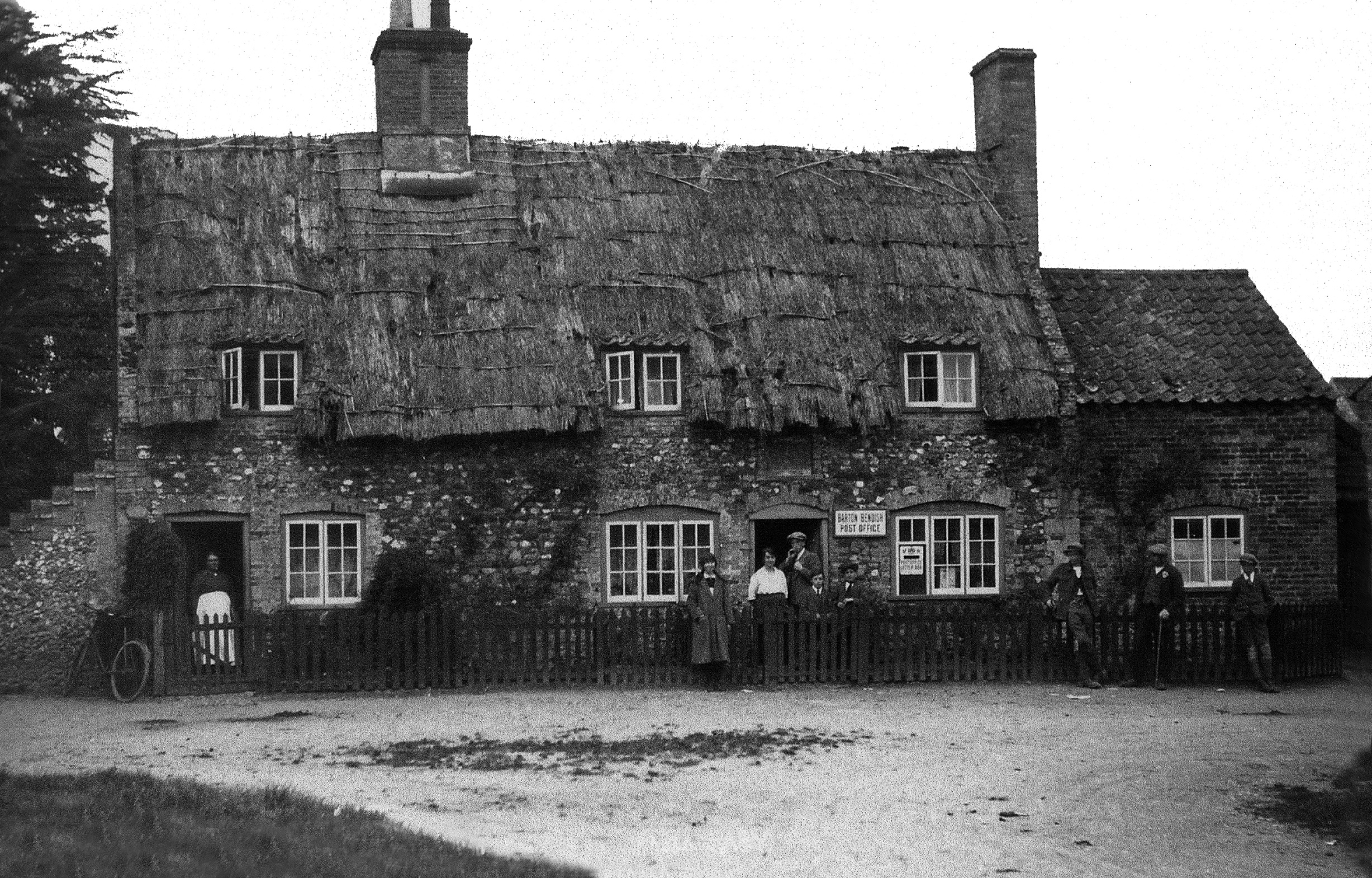 Amazingly, despite being such a small village, there were once three churches in Barton Bendish – St Andrew’s, St Mary’s, and the now demolished All Saints. It is a curiosity not only to have three churches, but that they were all built so close together, and at more or less the same time. 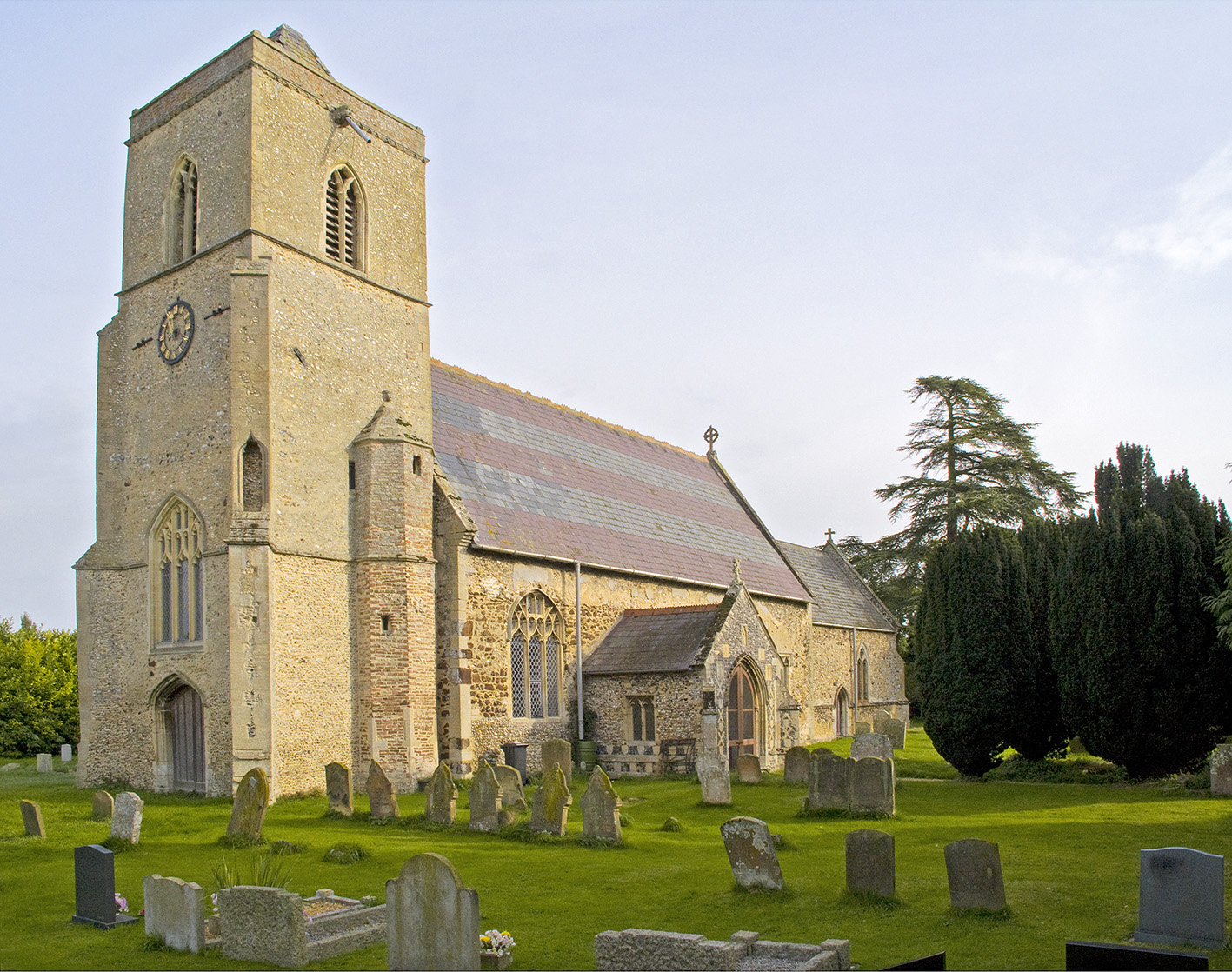 St Andrew’s is the church currently in use and is thought to have probably been the first to be built. It is known that the first rector of St Andrew’s was Roger de Elmham in about 1230. The roof which was originally thatch was replaced with new timbers and slate in the mid 19th century. The old Rectory in Church Road was built in 1725 and was home to the resident rectors of St Andrew’s until the 1930s. 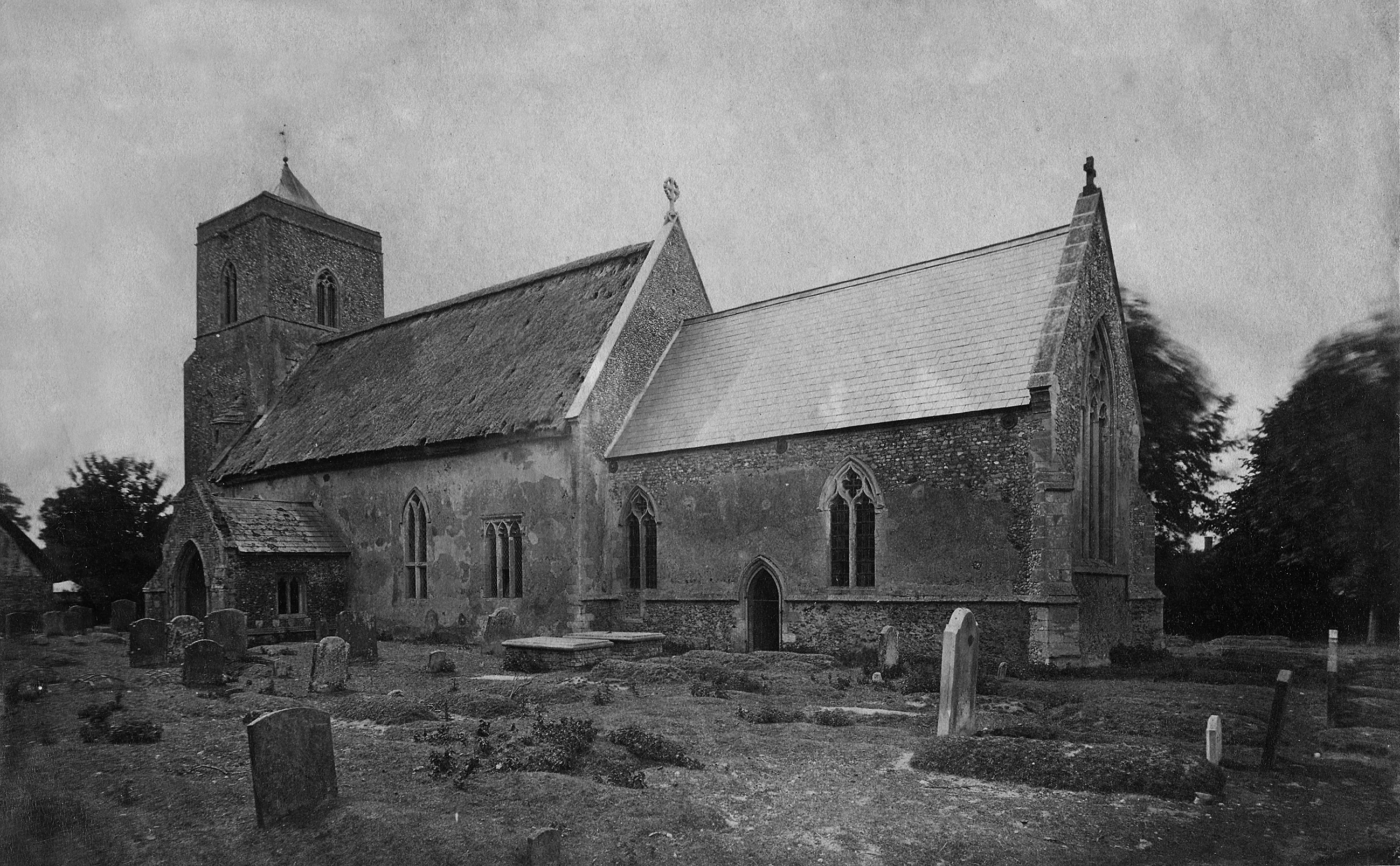 Photograph of St. Andrews’ Church taken in the 1800s, showing the then partially-thatched roof.

St Mary’s was last used for services in 1967 and was finally made redundant in 1974. The building is early 14th century and the first rector to be recorded was Hugh de Swafham in 1308. Originally St Mary’s had a tower but it fell down during a storm in 1710. The unique late Norman doorway at the west end of the little church dates to c1140 and was moved there from All Saints c1790. Further restoration work was carried out in 1865 and a newspaper report in 1903 stated that ‘the roof, which was formerly of tiles and thatch, was now slate’. This roof was removed and replaced with thatch in 1976 as part of restoration work carried out by the Churches Conservation Trust. The large rectory for St Mary’s was totally rebuilt in 1866. 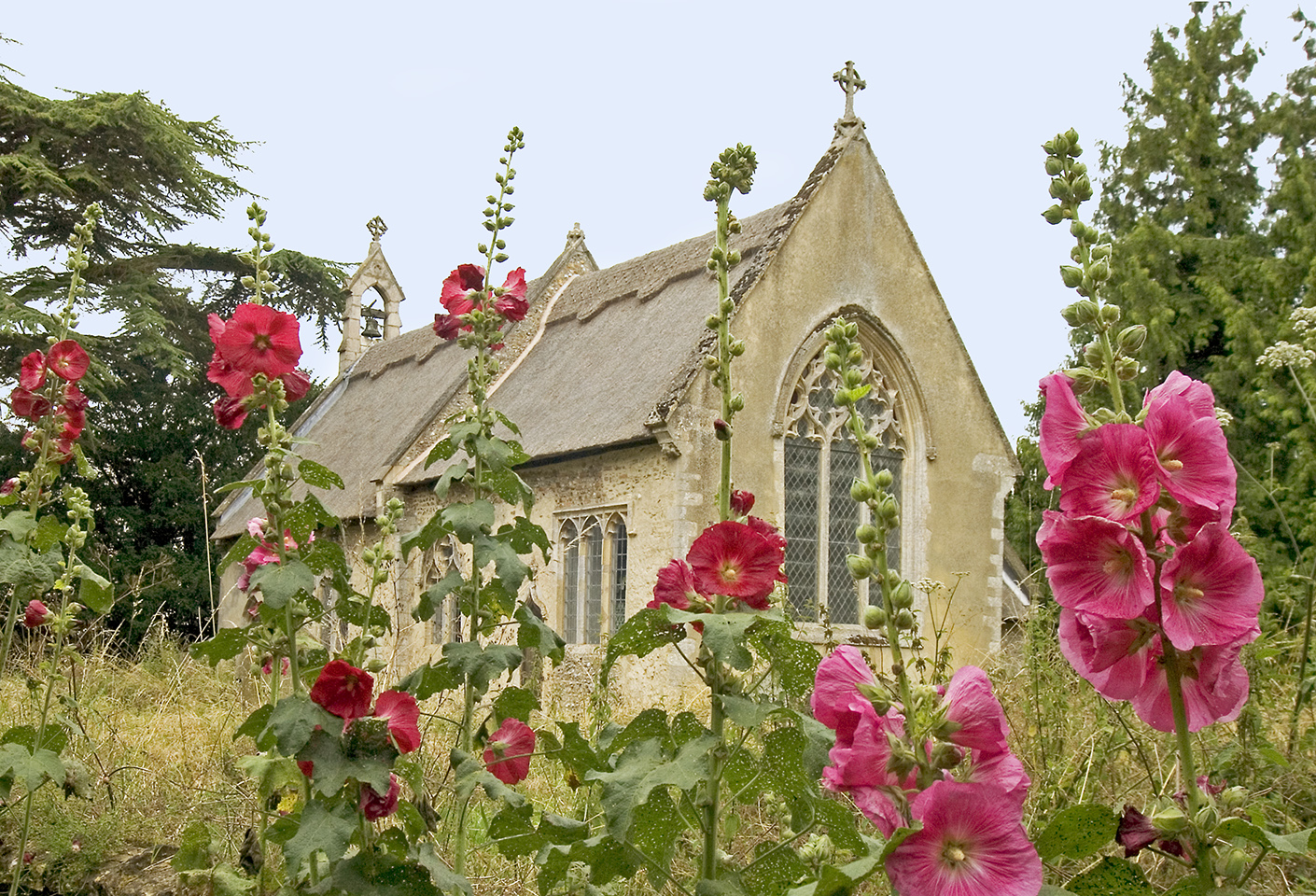 St. Marys Church photographed as it is today.

All Saints stood opposite St Andrew’s and is believed to have been built on the site of a small wooden church. The first recorded rector was John Clare in 1325 and it was demolished circa 1788. The three medieval bells passed through the hands of a dealer in Downham Market and are believed to have ended up in St Michael’s church at Whitwell, now redundant and used as a parish hall, which adjoins Reepham church in Norfolk.
A Wesleyan chapel was built at Barton Bendish (in Chapel Lane) in 1875 and another at Eastmoor in 1899. Both have now been converted into houses.